Walking through Santa Barbara’s beloved Funk Zone neighborhood enamors visitors with atmospheric charm and a conveniently dense collection of creative pursuits. Shining amongst all of the area’s progressive minds is Lindsey Ross of La Chambre Photographique — a photography studio and workspace unlike most others. Lindsey and the studio stand out because of high quality photography created through a vintage and rarely used method.

Lindsey Ross specializes in capturing and printing images using the wet plate collodion process. La Chambre Photographique’s website provides an adequate history of the process. The site notes that the “process was invented in 1850 and was one of the first major photographic process invented after the Daguerrotype was patented in 1839.” This description goes on to explain how the process captures images on metal or glass using collodion, which is liquid cotton. 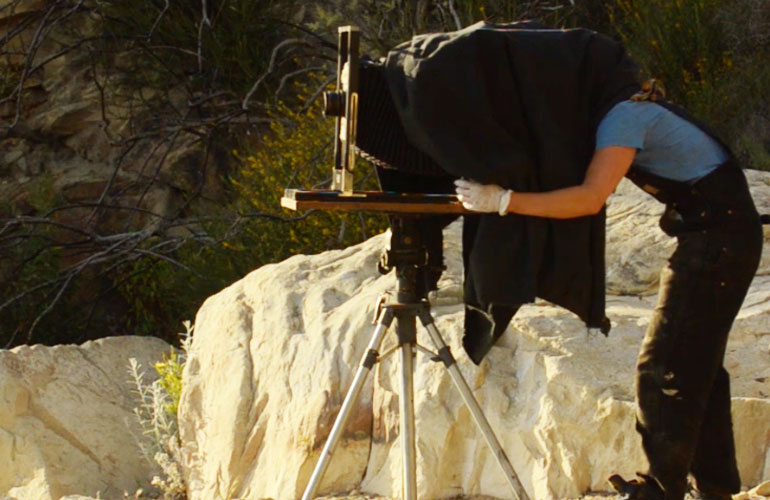 A little more visceral and basic than autofocus and color correction, huh? That’s part of why we’re huge fans of Lindsey Ross and her truly original Funk Zone studio. In fact, we aren’t the only people who’ve found recent fascination with the quality and process behind the work at La Chambre Photographique. Director Andrew Shoneberger created a short film following Lindsey through the creative process. His work earned an official selection from the 2014 Santa Barbara International Film Festival. Check out the film to get a taste of Ross’s personal feelings on photography and the wet plate collodion process.

We can see from the film that Ross holds her art to a higher standard when she describes taking a photograph by saying, “It’s all about that moment and producing it the proper way and taking care of every step and furnishing it properly, because you realize everything is finite.”

Take a gander at Lindsey’s fine art photography site to view the undeniable talent behind her finite creations. And, lastly, to get a true taste for the studio and the artist, swing by La Chambre Photographique in the Funk Zone.